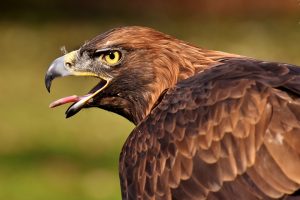 Though they both fly, birds and planes do not get along.

A prime example of this incompatibility would be the 2009 crash of a US Airways jet in New York City that lost power to both engines after striking a flock of birds. This flight, the so-called “Miracle on the Hudson” ended with no loss of life after the pilot successfully ditched the plane in the Hudson River.

Every year, planes flying in and out of Vancouver International Airport report hundreds of bird strikes. Each one represents a real danger to aircraft and passengers. The problem is worse in Vancouver than many other airports, because the airport is located in the Fraser River delta, an important flyway for migratory birds. Vancouver Airports’ solution to the problem has been to enlist the services of several birds of prey, and have handlers fly them around the airport in areas that they want to keep birds out of. The mere presence of these raptors (a bald eagle, a Harris hawk, and a peregrine falcon) serves as enough of a deterrent to make the airport safer by scaring off birds that see them as a threat.

This use of birds to control birds at the airport is a prime example of thinking outside of the box, and at Poulin’s, we applaud the choice made by the airport to undertake this solution. These birds have been on the job at YVR since 2012 and were made a permanent part of the airport’s pest control strategy.

At Poulin’s Pest Control, we don’t use raptors to scare away your pests, though sometimes you’d think we had. If you’ve got bird problems (big or small) our technicians will use every solution at their disposal to help rid you of your problem. For a free, no-obligation assessment of your pest problem, contact us online or by phone toll-free at 1-888-768-5467.