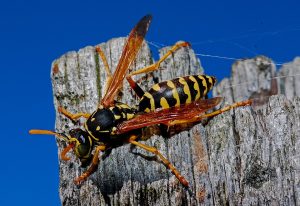 There are two main groups of wasps that we find here in Canada: social and solitary. Solitary wasps remain mainly on their own except to breed, whereas social wasps are found in a colony consisting of a queen, male drones and sterile female workers. The total number of wasps in a colony can differ depending on the species as well as environmental factors. Only the queen will survive the winter, staying warm inside of structures, behind bark or under debris.

Many wasps use their saliva to break down wood fibres to create paper for their nests, though others use different nest construction methods such as digging burrows underground or making mud cells.

Most social wasps are omnivorous, feeding on fallen fruit, nectar and carrion, whereas solitary wasps mainly feed on nectar. Parasitic wasps, part of the solitary group of wasps, build nests which they stock with a supply of immobilised prey – such as a large caterpillar – to feed their young. One species of parasitic wasp even specializes in paralyzing spiders to use in their nests.

All social wasps sting as a means of defense, using a modified ovipositor (egg-laying tube structure) connected to a poison sac. The lack of barbs on the stinger enables the wasp to sting an enemy multiple times. Sometimes, wasp stings are confused to be wasp bites. Wasps are capable of biting, though they generally only do so when catching prey. Stinging is the main method of defense for a social wasp.

Solitary wasps, on the other hand, will generally only sting if directly handled, but they can cause concern if there are many nests in an area. Additionally, Parasitic wasps pose no danger to humans — few species are able to sting and they do so only when mishandled. This group of wasps is beneficial to humans because they offer some biological or natural control of other insects in gardens.

To treat for wasps, you can use either a spray or a powder, depending on where the nest is and if it is a visible nest. Using the spray, you would want to saturate the interior of the nest and follow up by further saturating the exterior. Leave the nest for a minimum or 20 minutes before removing the nest. After removal, any wasps that are seen in the area are likely to disperse in the next day or so.

For hidden nests, you can use an insecticide dust directly into the areas the wasps have been entering/exiting. This method uses the wasps as a means to get the powder back to the centre of the nest, killing the queen and destroying the nest from the inside out. Sprays and foams are not the most effective methods for hidden nests, as many times this results in missing the nest entirely.

Only use products labelled for use on wasps and be sure to wear proper safety equipment. Treat for the wasps at night or when it is almost dark, so that there is much less activity from the wasps. Alternatively, you can give us a call at 1-888-768-5467 and we will be happy to help you out! Remember – there’s no foolin’ with Poulin!