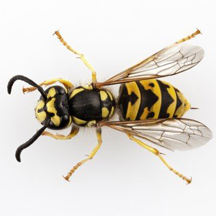 FACT: Unlike bees, wasps do not make honey, but some species help in the pollination of plants.

HABITS
Wasps have four stages in their life history: egg, larva, pupa, and adult. Adult wasps have four sparsely veined, membranous wings, and most species have their abdomen joined to the thorax across a very narrow waist. Wasps have chewing mouth parts, for consuming their food and for pulping wood, often used to build the walls of their nests.

CONTROL
Wasp Spray
If you have a visible hanging nest then you can use a pressurized wasp spray or foam. Make sure this treatment is performed only at night or when it is almost dark. Make sure you wear proper safety equipment. They are not likely to exit the nest, but it is best to be prepared. You want to saturate the interior of the nest first, then, once you have done this follow up by saturating the entire exterior of the nest. Leave the nest for approximately 20 minutes before removing the nest. Make sure that before you remove the nest that there isn’t any further activity.

When removing, take the same precautions as mentioned earlier. Be sure to remove the entire nest, including any pieces that fall to the ground during removal.

Insect Dust
If you are treating an area where wasps are frequently traveling in and out of a hidden nest (such as in the ground or in a crack on the side of the house) you should be using an insect dust. The reason for the use of the dust over the spray in these situations is because when you spray into the cracks/holes, you aren’t necessarily spraying the nest. You are more than likely spraying the back of a wall, missing the nest completely. Instead, using a labelled insect dust allows the insect to track it back to the nest.

Be sure to perform the treatment only at night, or when it is almost dark, and take the necessary safety precautions mentioned above.

Poulin’s Pest Control will be more than happy to assist with wasp removal so you don’t have to tackle this on your own. We are trained and licensed and will remove wasps during the day when control is much more difficult but successful. Contact Poulin’s Pest Control at 1-888-768-5467.