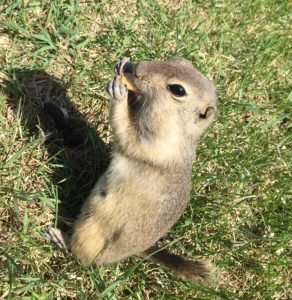 Richardson Ground Squirrels are generally active during the day in spring and summer months. Females tend to be territorial and will defend their nesting sites. They are mainly found in the southern areas of Manitoba, Saskatchewan, and Alberta.

Feeding: Richardson Ground Squirrels are herbivores. This means they eat just grasses and plants. As the season changes they will move to seeds, grains or other plant material and store them in their burrows for the hibernation over winter.

Hibernation: Richardson Ground Squirrels start hibernation as early as July and up to as late as September. Males are first to emerge from hibernation in March, followed by females a couple of weeks later.

Nesting: As the spring time temperatures creep up and the ground gets warmer, mounds of dirt start appearing in fields, backyards, or ditches. Their burrows and range is small and there can be many mounds in fields and open spaces, as they like to see any predators coming.

Reproduction: Females produce one litter per year, with an average of 6 – 8 young. The young, are born in April or May. Young ground squirrels remain underground in the burrow until they are approximately 30 days old, emerging from burrows late May to mid-June, weather dependent.

Controlling ‘gophers’ can be done by registered rodenticides, trapping, asphyxiation via Giant Destroyers, or by shooting.

If you find yourself with a gopher problem, we can help! Poulin’s has 7 locations throughout Western Canada. Our technicians can control these rodents early in the spring before the new litters of 6 – 8 young come out of the burrows in approximately late May to mid-June. Once you see them give us a call.