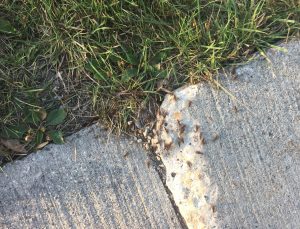 At this time of year, ants are working hard at setting up for winter – but they also have to deal with those thoughts of lust that start to occur. Ants are social creatures that communicate with each other, it’s important that ants have genetic diversity within their colonies. Diversity is so important to ants that the queen of a colony will direct the creation of ant swarmers, also known as reproductive. These male reproductive ants swarm out looking for new queens from other colonies or even within their own to mate with and increase the overall genetic diversity of the colony. The more diverse, the stronger a colony will be. The reproductive swarm can be many or only a few individuals that are actively searching for a potential mate.

This action usually occurs seasonally, depending on the type of ant species. Carpenter ants tend to swarm at varying times of the year, and in Manitoba we see honey ant swarmers flying about around late August and early September. Field ants tend to expand their colonies in June or early July, as food and resources are plentiful at that time of year. Swarming usually lasts a day, or a few days at the most, and may occur once, or a few times per year, depending on the species.

Swarms occur when environmental clues indicate that it’s the right time to send reproductive ants out to increase numbers and genetic diversity between colonies. Those clues can be temperature, relative humidity changes, wind speeds, or a change in day length. These environmental clues make all ant colonies react to increase their strength around the same time – individual ant colonies tend to not be in communication with each other.

When this happens, most people will worry or ask why they are doing that. One thing a homeowner can learn from this is that if they are swarmed by flying ants there is either a colony near the house, inside the house, or even underneath a structure.