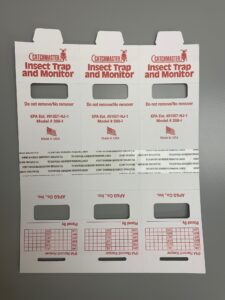 Trap selection is an important component of any trapping and monitoring program within an integrated pest management program. Improper selection of a trap style can lead to misrepresentation of a true pest numbers in an area. This is due to the fact that pests may:

For example, if you use a suspended hanging trap to monitor when the main pest is a beetle that rarely flies.

A second example would be using a glue trap that has only a thin glue surface to try to capture rodents or large insects that can easily pull themselves from the glue once they enter the trap.

The result of both of these is a monitoring program that is not collecting reliable information.

Before deciding what style of trap to use, put some thought into what type of pests your facility has seen in the past. It might be good to mix it up a bit by having different styles. If you only have the budget for one trap style, pick one that can capture both crawling beetles and flying moths. Don’t be afraid to change trap styles if the one you are currently using is not performing well.