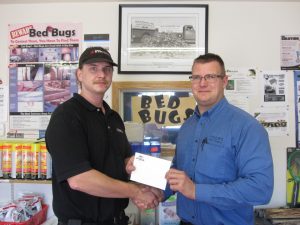 Richard Vilness recently celebrated his five-year anniversary with Poulin’s Pest Control! Ricky works at our Saskatoon, Saskatchewan branch as a Heat Technician. Ricky started working with Poulin’s after a friend of his was taking part in a summer school program, he was most interested in the unique aspect of pest control and how the day-to-day would be different at each job site. When Ricky is not at Poulin’s he can be found working on the motors of boats and various vehicles, working hard on some welding projects, and spending quality time with his family.

Over the years Ricky has gained experience and knowledge and has become an expert in his field, the trust that is gained from recurring clients is something that he considers one of his greatest successes. Ricky prides himself in knowing that his customers are happy and feel satisfied with the work he does for them and that they can be confident that their pest problems will be gone once he shows up!

Ricky said that one of his most memorable moments while working with Poulin’s was when he was tasked to go into a mine shaft and collect six baby raccoons and trap the mother. This process went over the course of two days and in the end the family of raccoons was released to a wildlife rehabilitation facility near North Battleford, Saskatchewan.

When asked what he enjoys most about working at Poulin’s, he replied “the job is always changing, the atmosphere with co-workers, and it means a lot to me when a company treats you like family.”

Thank you, Richard, for all your hard work!