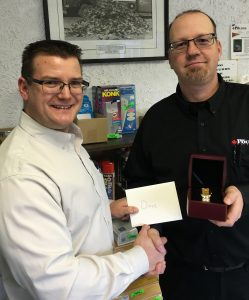 One of our greatest successes as a company is that we have many long-term staff members on our team.

Our Brandon Branch Manager, David Lane, has been with Poulin’s Pest Control for over 20 years! What keeps him coming back every day after 20 long years? He says the best thing about working for Poulin’s is that the owners know your name, they know about your family, and they truly care about what you have to say. He looks forward to seeing new and exciting things and places, and having the opportunity to travel the entire province of Manitoba, especially the far north.

David didn’t find his employment with Poulin’s in the typical way – such as, responding to an advertisement. “The previous manager was a regular at the Bar and Grill I had managed so I got to know him well. He was also a good friend of my father. The manager at the time asked if I was interested in a position that was coming available. I said I would try it out and the rest is history.” He says. David started his career as a Pest Management Professional and worked his way up to Branch Manager.

David has had many successes throughout his career, most notable to him is the part he played in building the company name and instilling confidence in our clients so that they know when they call, their issues will be handled without question.

We asked for one of David’s favorite memories from the past 20 years. He had this to share, “I had just captured a small woodchuck in a live trap not far from my home. I thought it would be a great idea to show my two small children. So, I had them stand in the doorway of the house and I went to go get it from my truck. I walked up to the doorstep with the live trap and the woodchuck got spooked and ran towards the end of the trap. The safety latch broke and the woodchuck ended up on the doorstep with two kids, my wife, and our dog. Not knowing what to do it ran inside the house and hid under the shoe rack in the foyer. So, there we are with two squealing kids, a barking dog, and my wife yelling ‘it’s in the house!’ I’m standing on the doorstep looking at the trap trying to figure out how he got out. Long story short, after a small chase it ran back outside to never be seen again.”

When David is not running the Poulin’s Brandon branch, you can find him playing hockey, golf, or softball, or coaching his kids in hockey and softball. He enjoys working in the yard, camping, travelling, and most of all spending time with his family. When asked to describe what Poulin’s means to him, David said, “Friendship, rewarding, loyalty, family, and knowing that you are important to the company.”

Thank you, David, for over 20 years of dedication and all your hard work!