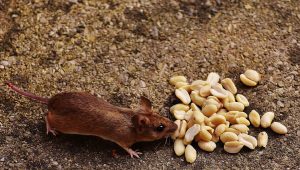 We all tend to spend more time indoors when the weather turns cold.  With an average winter temperature of -16.6 degrees Celsius, Red Deer certainly qualifies as cold during the winter months.

These extremely low temperatures cause many animals that spend their summers in the fields to seek warmth, often in our homes, businesses, and barns.  The most prevalent of these is mice.

Generally viewed as a relatively innocuous nuisance creature, mice are messy and multiply very quickly, which makes it hard to get rid of an infestation once it takes hold.  The most effective means of dealing with mice is perimeter protection in the form of mechanical traps and poisons.

The health risks that are associated with mouse infestations weren’t fully known until relatively recently.  The mice themselves carry a variety of bacterial and viral threats, which can be passed to humans directly, through contact with contaminated surfaces and foodstuffs, and even through mites and fleas that the mice bring with them.

In 2013, Central Alberta had one confirmed case of Hantavirus, a potentially dangerous viral infection known to be carried by Deer mice.  Hantavirus can cause a fatal lung condition to develop in its victims.  Other diseases that can be transmitted by the common House mouse and associated parasites are leptospirosis (a potentially fatal bacterial infection caused by contact with the infected rodent’s urine), rickettsialpox (a bacterial illness transmitted between mice and humans by mites), tularemia (a serious bacterial illness transmitted directly from mice, through contaminated water, and by tick bites), and lymphocytic choriomeningitis, a viral disease that can cause meningitis and encephalitis in its human victims.  Rodents are infamous for their role in carrying the “Black Death”, or bubonic plague that swept through Europe in the 14th Century, killing nearly half the population.

While all this talk of disease may seem rather alarmist, we’re not out to scare you.  We just want to illustrate that a rodent problem can be serious and should be dealt with right away, as they can become much worse very quickly.  If you have a problem, you should know that you can count on Poulin’s Pest Control to help rid yourself of a mouse infestation. We sell a variety of pest control products from our web store, and in person provide prompt, courteous, and professional pest control services.