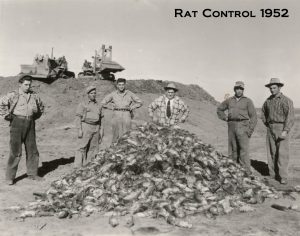 On January 22, 1955, the Winnipeg Free Press published an article called ‘The Man Who Killed 10 Million Rats’.

The man in which the story referred to was none other than Napoleon Louis Poulin, the founder of Poulin’s Pest Control.

“He earned that distinctive title in the early 1950’s when he led a small number group of exterminators and took on the project of exterminating Alberta’s overpopulation of rats,” says Lincoln Poulin, Napoleon’s grandson.

Poulin’s Pest Control helped write a piece of Canadian history; their efforts and talents were the main result of Alberta becoming a “rat free” province. The precise number of rats exterminated by Poulin’s is uncertain, though it can be noted that Napoleon was very methodical in the way he completed the Alberta project.

“My grandfather studied rat biology and habits. Throughout Alberta, they treated every landfill site, grain elevator and farm that had an infestation. Finally, after 18 months and 4,800 square miles of land treatment, Alberta could call itself rat free.”

Still today, Alberta’s “rat-free” status still stands strong with its aggressive rat control program kept the vermin outside of the borders. It’s estimated one pair of reproducing rats could lead to a colony of 15,000 rats in a year. This showcases the importance of calling an Alberta Exterminator if you see any rats.

“It would be naive to think that no rat ever set foot in Alberta. Rats don’t respect provincial borders. But the key is as soon as we find evidence we act very quickly and very aggressively.” Verlyn Olson, Minister of Agriculture.

Napoleon passed away in the late 1960s, but the family owned company has continued his legacy. His son, Don Poulin, took over as President of the company until his passing in January 2018. Now with his grandson, Lincoln Poulin, at the helm Poulin’s Pest Control is bound to prosper.

While rats may have put Poulin’s in the headlines, Poulin’s is also known for its vast variety of pest control services such as treatments for bed bugs, flies, mice, and gophers. Poulin’s also provides educational presentations given to apartment blocks, hotels, hospitals, moving companies, etc. on the awareness of bed bugs.

“Tale the time to check for bed bugs, especially if you travel. It only takes a few minutes to check mattresses and furniture. Bed bugs can be quite visible and easy to detect,” recommends Lincoln.

Poulin’s knows that dealing with pests is a serious matter and makes it their priority to treat every customer with compassion and respect.

“People don’t phone us for no reason, they phone us because they need our help,” says Lincoln. “When we come out, we want to ensure the customer that we’re professional, care about their concerns, and will resolve their pest problem.”

Customer service and attention to accuracy towards eliminating pests are very important to the company. Poulin’s has become highly regarded as one of the most innovative and efficient companies in the pest control industry. With seven offices in Western Canada and its own manufacturing plant. Poulin’s continues to keep Napoleon’s reputation alive.

A question that is frequently asked by people about Poulin’s is “where did their jingle come from?” The catchy jingle was produced by a New York affiliate of a Winnipeg radio station in the early 1970’s. It was not a first choice for Don, but seeing as how the company already had a contract with the radio station, it had to be used. Now, after more than 45 years of advertising, the jingle is widely known and loved (even by Don).

No foolin’ with Poulin.