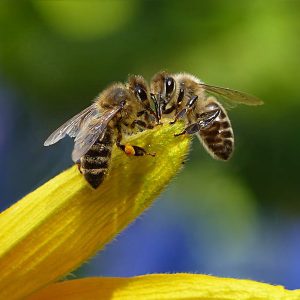 Everyone has certain expectations when it comes to love, sex, or even Valentines Day. Some us like to keep it simple and low key, while others crave adventure and something more exciting. The same can be said about the insect world, though some of their excitement may be a bit more than we can handle. Here are your top five crazy and strange insect mating rituals.

Baby bed bugs are created through a process called ‘traumatic insemination’. Male bed bugs pierce the abdomen of female bed bugs and inject sperm through the wound. Though a lot of the time the male bed bug will mistake another male for a female. Oops.

The queen bee will venture out on a flight for the sole purpose of mating. Male drone bees will mount the queen mid-flight to inseminate their seed. Once finished the drone flies away but his endophallus remains stuck inside the queen causing the pelvis to be ripped open and resulting in his death. At least he died doing what he loves.

If a female refuses a male water striders’ advances, the male will hold the female under water and tap the water’s surface causing ripples to attract predators. The female has to decide if she wants to be someone’s lunch or give in and mate with the male. Males will only stop attracting predators to the female if she gives in. Apparently, they haven’t heard the saying, ‘no means no’.

Male Soapberry bugs heavily outnumber females, competition among males to find a mate is fierce. Males will take extreme measures to ensure their seed is passed on to the next generation. Males will stay connected to their female partners for up to 11 days as a way of guarding their mate from copulating with another male. Some males will even stay connected with the female until she is ready to lay her eggs. Being clingy pays off for these guys.

Female praying mantis’ lure males to them with attractive pheromones. Males approach and engage in a courtship dance, once a worthy mate is crowned he is allowed to mate with the female. During fertilization the female chews the head off her partner and cannibalizes his body for nutrients to feed her growing offspring. Delicious.

Mating is not all traumatic, murderous, and cannibalistic in the animal world though, on a lighter side, we do have a rodent that believes in true love…

Male and female prairie voles enter into lifelong pair bonds, they groom each other, cuddle, share a nest, and mate for life. These monogamous rodents have a bond that is beyond mating, and even when a female prairie vole dies, her male partner will not find a new mate. But, if you give a male prairie vole a taste of alcohol and he will be more likely the cheat on his partner. Females on the other hand are more likely to stick to their partners when drinking.