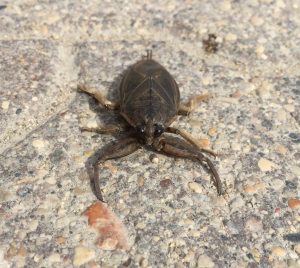 In nature, it’s not always the mothers taking care of their young – if you read our Mother’s Day blog you’ll know exactly what we mean by this. Some dads go above and beyond, on occasion taking sole responsibility for their offspring. However, others aren’t too keen about their fatherly roles. In the spirit of Father’s Day, here’s a list of some of the best – and worst – fathers of the animal kingdom.

8) Bad Dads: Sea Bass – At first, the male Sea Bass is a fine father, protecting the eggs from predators. However, when hunger strikes this male is known to feast upon his own eggs. He doesn’t even think twice about it. In the male Sea Bass’ mind, he is priority number one, 20,000 leagues above his offspring.

7) Good Dads: Hardhead Catfish – In contrast to the Sea Bass, the Hardhead Catfish male keeps his young safe by carrying them in his mouth until they get large enough to survive on their own. He will even go without eating in the interest of his offspring, completely putting the Sea Bass to shame.

6) Bad Dads: Sand Goby – Another fish on this list, the male sand goby mainly cares about himself. Even with plenty of food for him to eat, he will end up eating nearly a third of his eggs. There are a few theories as to why he does this, one being that he knows that the largest eggs take the longest to hatch, so he snacks on them in order to get back into the dating game. He is an expert at being a showy male, demonstrating perfect paternal care when females are present. Still, as soon as the females turn their dorsal fins to them, the male sand gobies make fast work of ridding the competition for attention. “What kids?”

5) Good Dads: Giant Water Bug – Male Giant Water Bugs are very dedicated fathers. The mothers of some species of giant water bugs adhere their new eggs to the backs of the fathers, where they stay until they hatch (about a week or so). Sometimes, the number of eggs on the male’s back is around 150! That’s a lot of piggyback rides.

4) Bad dads: Grizzly Bear – Grizzly bear males are extremely territorial and will kill any other male grizzly on their home turf, which can be as large as 3,000 square kilometres. This is especially true for young cubs. Because of this, he is very likely to come in contact with his own offspring and does not hesitate in eliminating them. Grizzly bears are opportunistic hunters, meaning that they will take advantage of any food source they come across – berries, grubs, or even their own cubs.

3) Good Dads: Red Fox – The red fox is an excellent father to his kits. As the mother needs to give constant care for their young after they are born, it is up to the father red fox to feed his mate and their offspring for the first 3 months. Once they are old enough to hunt, the father fox gives them lessons to guide them into becoming great masters of the hunt. This helps ensure their survival. Also, if the mother dies or disappears, the father steps in to provide and care for the kits until they are able to be out on their own.

2) Bad Dads: Lion – The lion tops our list as worst father, due to many reasons. The first is that a male lion, upon becoming head of his pride, will usually kill all the cubs fathered by the previous leader. This is to ensure that his, and only his, line of genetics will be the ones to survive. Without cubs of their own, the females take to mating with the new alpha male. Once there are new cubs, though, the father lion remains neglectful. Father lions spend most of their days lying in the shade, waiting for one of their wives to bring home food. Females of the pride do all of the hunting and nearly all of the parenting, whereas the male is to protect his territory from other prides as well as scavengers such as hyenas. In addition, father lions are not great with sharing, even with their own cubs. Once the mother brings home her kill, the alpha male lion is always the first one to eat and he often leaves only scraps for the rest of the pride. If there isn’t enough food to go around, the females and cubs starve. Dad clearly gets the “lion’s share” of all meals.

1) Good Dads: Seahorse – The male seahorse is number one on the “best dads” list. When seahorses mate, they mate for life. They are monogamous, and even have dances with their mates during the courtship process (how romantic!). What’s spectacular is that the males in this species are the ones that end up getting pregnant and carrying their offspring. Sometimes, this is as many as 1,000 babies! Now that’s dedication.