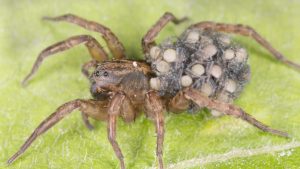 Human mothers may invest a lot of time and money in raising their young, but that kind of devotion isn’t always echoed throughout the animal kingdom. In the animal world, some mothers go far above and beyond, giving up not just time but often their own food supplies in order to ensure that their child survives. Others, however, do very little at all to care for their young, leaving their offspring to fend for themselves from a very young age or appear to go out of their way to make it difficult for their children to survive.

In the spirit of Mother’s Day, we have made a list of some of the best – and worst – moms of the animal kingdom.

Stinging insects such as bees and wasps provide safe homes for their eggs as well as a food supply for babies after they hatch. Some solitary wasps put their eggs in burrows or mud nests alongside paralyzed insects for them to feed on as soon as they hatch. Social bees and wasps (the ones that create hives) are even more involved as parents. In the hive, newly-hatched larvae are looked after and fed by the entire hive until they become adults.

As opposed to solitary wasps, stick insect moms just drop their eggs as they travel. They don’t tend to the eggs at all, not bothering to protect them, hide them or put them where there’s a food source. Oh, and once they hatch, the babies are on their own.

Female and male sowbugs are active parents, both gathering food and cleaning the burrow to prepare for their family. The female carries the eggs in her pouch (7 to 200 eggs in a pouch called a vivarium, on the underside of her body) until they hatch in about 3 to 7 weeks. This dedicated mom then continues to carry the young for 6 to 8 weeks after hatching, if necessary.

Cuckoo mothers aren’t the best mothers, and they know it! To get out of mothering, these birds have discovered out a way to pass off the task. Mother cuckoos will sneakily lay their eggs in another bird’s nest, tricking the other “bird-mother-to-be” into taking on the expensive burden of raising the chick. What’s worse it that the cuckoo chick usually hatches first, growing faster than the other chicks in the nest. This often forces the other chicks out of the nest, where they eventually die. The cuckoo chick then gets the full attention of its bewildered adoptive parents, raising its chance of survival.

Raccoon mothers fight ferociously to protect their babies. She guards her 3 or 4 kits attentively for about four months, until they’re ready to venture out on their own. Sometimes they can even stay with her until she needs to make way for her next litter.

Another mom on our list that can’t take the pressures of being a mother is the Burying beetle. These beetles have an interesting approach to those of their offspring who “bug” them too much – they eat them. Researchers have come to the conclusion that the burying beetle larvae that only ask for food when they really need it are stronger and are therefore much more likely to survive to adulthood. As a result, the ones that beg too much are more or less killed off due to natural selection by their mother. Whatever happened to no child left behind?

Female wolf spiders carry their egg sacs attached to their spinnerets. If the mother is separated from her egg sac, she will search furiously for it. These mothers are also known to be quite aggressive while carrying their egg sacs. Once the eggs hatch, the wolf spider mother carries the juvenile spiders on her back until they are old enough to take care of themselves.

Rabbit mothers have lots of children, but not enough time to tend to all of them as much as other mothers on this list. Mother rabbits immediately leave the burrow after giving birth and only stop by for a few minutes each day afterwards in order to feed the litter. After less than a month, the youngsters are left to fend for themselves.

Despite what you might think of alligators – that they’re big, cold-blooded, ravenous hunters, mother alligators are actually quite loving parents. From the time she lays her eggs up until the time her babies are able to hunt on their own, the mother alligator fiercely protects her children. When the eggs are ready to hatch, they will call out to her and she will even help break them out of their eggs. She then carries the newborns in their jaws for the greatest protection. For the next full year, the mother alligator will assist her babies to the water where she will assist in teaching them to hunt and eat fish, insects, snails and other crustaceans.

These are BAD moms. They might look cute and cuddly, but many mothers in this species actually feed on their offspring. The exact cause behind this cannibalistic behavior is not specifically known, though some scientists have formed several probable theories. One suggests that the mother hamster’s body lacks nutrition after giving birth, and to make up for it, sees her offspring as a supplement. Another theory suggests that a mother hamster may feel powerless by the large litter she has just produced and therefore “does away” with a few pups by eating them. One more theory is that to ensure there is enough food for everyone, the mother reduces her litter size by removing some of her babies from the equation. Thankfully, human mothers do not share this cannibalistic nature!