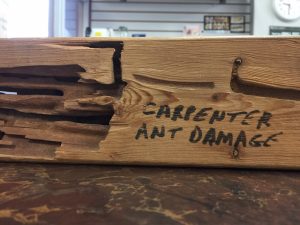 Carpenter ants are one of the biggest insect threats to Canadian homes. They’re found in all areas of the province, and infestations often remain undetected, until repair becomes very costly.

Most of the time, when people think about insects causing property damage, they think about termites. Carpenter ants, unlike termites, don’t consume wood fiber, they hollow it out by creating “galleries” in which to nest.

In nature, carpenter ants are very useful. By entering into fallen trees and hollowing it out for nests, they speed the decomposition process, allowing more moisture to penetrate, and letting other natural destroyers including bacteria, fungi, and other insects to assist in the destruction.

This is all fine and good while we’re talking about a fallen log in the woods, but an entirely different matter when it comes to our homes.

Carpenter ants like moist wood – because its softer, its easier for them to bite into. They’ll most often invade your home along the foundation line, under windows or eaves that are moist, or where there are plumbing leaks or excess condensation. They’ll burrow constantly as the nest expands and push the wood that they remove from their tunnels out of the board. Often, you’ll find cone-shaped piles of these castoffs along the floor near the nest.

The problem is that the ants work slowly, so you might not notice that your home’s structure has been compromised until it’s too late. If you live in an area where carpenter ant infestations are common, it’s good practice to be extra vigilant.

Carpenter ants tend to be on the larger size of the ant scale, usually bigger than ¼ inch in length, and can be red or black in colour. It’s common to see them foraging for food in the evening.

If you suspect you’ve got a carpenter ant infestation, play it safe and call a professional. Poulin’s Pest Control has the experience needed to help you control a Carpenter ant problem. Remember, there’s no foolin with Poulin.