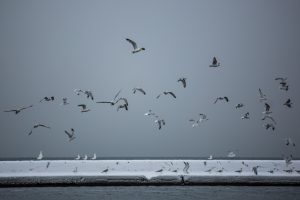 The number one pest bird in North America is the common feral (wild) pigeon. Like many pests, the pigeon is an invasive species. They are descended from homing pigeons brought from Europe in the 1600s as a means of carrying messages, and as food. Like most invaders, the proliferation of the feral pigeon has caused and imbalance in the North American ecosystem. Unafraid of humans after hundreds of years of domestication, the pigeon is very comfortable making its home in and around ours. As a result, the bird is responsible for damaging more property that belongs to humans than any other creature with wings.

Exceedingly adaptable, the pigeon is very good at reproducing. Unchecked, they can reproduce at the rate of four broods annually, hatching an average of two young each time.

Large numbers of birds also negatively impact the quality of water along the Manitoba Interlake region. Pigeons, seagulls and other nuisance birds pollute waters when they land on piers and congregate on beaches and then deposit their droppings containing harmful bacteria into water used for recreation. Beaches and other recreational areas require bird control measures to prevent the spread of disease and increase water quality, especially at popular destinations.

A study in the United Kingdom along the Fylde coast in North West England confirmed a link between large bird populations and water quality. The researchers took weekly counts of each bird variety and observed that the birds increased according to seasonal migration and breeding habits. Notably, the pigeon population increased during the busiest vacation times when the beaches were most often used by vacationers. Humans also routinely fed scraps to the birds, resulting in flocks that swarmed to 40-50 birds at a time. An increase of birds, the study finds, leads to an increase of contaminants in the water.

This study has relevance to Manitoba’s Interlake, where similar bird populations tend to congregate on beaches and piers and in places where they are commonly fed by humans. They then deposit fecal materials in surrounding waters, increasing the bacteria within the very water people swim. If such areas are left without bird control, the water pollution will rise to unhealthy levels.

While there are some natural predators, the pigeon simply outpaces their appetite by making more pigeons quickly. A seemingly small number of pigeons coming to inhabit your property at first seem like no big problem, but it can very quickly become a much bigger issue. Pigeon droppings have a high uric acid content, making them very corrosive. They can actually damage wood, bricks, and concrete, and also can contain bacteria and fungi that cause illness in people. Cryptococcosis and histoplasmosis are diseases that have been attributed to pigeon droppings.

Poulin’s Pest Control has experience in dealing with infestations of all kinds, including pigeons. Our technicians are well trained in effective and humane control of pests, and we look forward to bringing you the best technology available. We’ll respond quickly to your call and work with you to develop a pigeon control strategy that keeps your family’s health and comfort in mind.