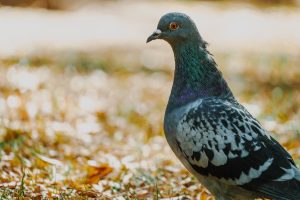 The number one pest bird in North America is the common feral (wild) pigeon.  They’re particularly prevalent in major centers.

Like many pests, the pigeon is an invasive species.  They are descended from homing pigeons brought from Europe in the 1600s as a means of carrying messages, and as food.
Like most invaders, the proliferation of the feral pigeon has caused and imbalance in the North American ecosystem.  Unafraid of humans after hundreds of years of domestication, the pigeon is very comfortable making its home in and around ours.  As a result, the bird is responsible for damaging more property that belongs to humans than any other creature with wings.

Exceedingly adaptable, the pigeon is very good at reproducing.   Unchecked, they can reproduce at the rate of four broods annually, hatching an average of two young each time.

While there are some natural predators, the pigeon simply outpaces their appetite by making more pigeons quickly.  A seemingly small number of pigeons coming to inhabit your property at first seem like no big problem, but it can very quickly become a much bigger issue.  Pigeon droppings have a high uric acid content, making them very corrosive.  They can actually damage wood, bricks, and concrete, and also can contain bacteria and fungi that cause illness in humans.  Cryptococcosis and histoplasmosis are diseases that have been attributed to pigeon droppings.

Poulin’s Pest Control has experience in dealing with infestations of all kinds, including pigeons.  Our technicians are well trained in effective and humane control of pests, and we look forward to bringing you the best technology available.  Poulin’s has many locations throughout Western Canada. We’ll respond quickly to your call and work with you to develop a pigeon control strategy that keeps your family’s health and comfort in mind.