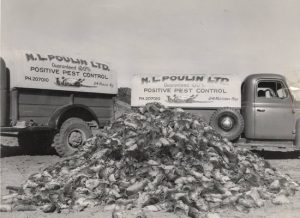 A St. Jean, Manitoba hotel keeper once refused to let his son have a dog. Like most boys, he found a way around the problem by keeping a small puppy hidden away in a grain shed. One morning when he went out for his usual visit, he found his tiny pet had been killed by rats. Unfortunately for the rats, they had outraged a boy named Napoleon Louis Poulin who would later found Poulin’s Pest Control.

Poulin’s Pest Control has grown considerably since the early 1900′s when Napoleon Louis Poulin had his secret puppy, and has become one of the most well known pest control companies in Western Canada. As a family owned business, we know that relationships are important and we aim to ensure that every customer and client feels like they are a part of our family. That’s why there’s no foolin with Poulin!